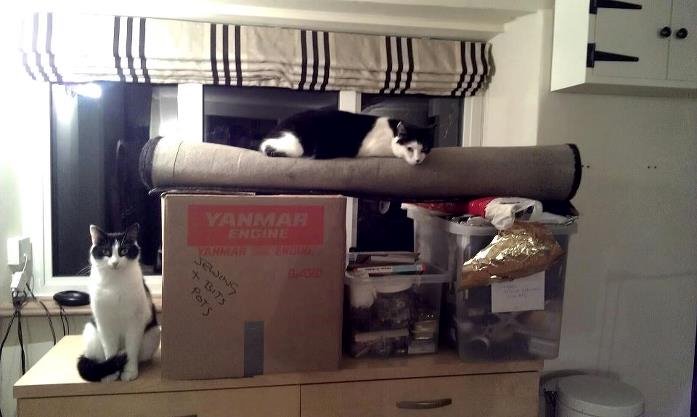 Earlier this year I was asked to help Bubbles.  Together with his brother, Licorice and a couple of humans, Bubbles had moved house.  Whilst everyone else was settling in quite happily, poor little Bubbles, a fabulously furry, black and white cat was very stressed.  As cats do, he expressed his unhappiness with territorial spraying in the house, a thing he’d never done before.

Bubbles’ mum loves him so much that she was unhappier that he was unhappy, than she was about her natural antipathy to the smell, but still, everyone could be happier if Bubbles could be settled.

I suggested a few practical ideas to help with the spraying, including putting his litter tray under a table, cats like to be private, and lining it with newspaper, which my cats prefer.  Besides it’s compostable unlike cat litter.  Whoever thought that cat litter replicated the feel of soil to a cat?

Later that day, the email came through with Bubbles’ photos.  I was able to tune in to him straightaway and we had a telepathic chat.  Sensing his fear of the new environment and his confusion about the permanence or not of his new home I was able to talk to Bubbles and give him some answers and then to his human about what he needed to know from her. Sue was up for all of this and actually said that she and her beloved cat had grown closer as a result.

One thing generally leads to another and Sue and I developed a friendship, triggered by the Bubbles connection and she subsequently joined the “Love to Live, Live to Love” group that we run once a month.

The night before the April group meeting, I was asked if I would like another hen.  There was one little hen left all on her own and her owner thought she’d be happier with some of her own kind.  Resisting my natural inclination to say YES to every homeless creature, instead I asked the group. Before I’d got the words out, Sue offered a home to the hen.  Wonderful. Joy all round!

The following afternoon Sue rang me, to say that the little hen was homeless no more, but what a chain of synchronicities had unfolded. Sue rang the hen’s owner; he took the hen to the Bluebell Wood Children’s Hospice Shop in Bakewell, from where Sue would collect both hen and her daughter, Sophie who volunteers there. Daughter knows nothing of this plan.

Meanwhile, back at the Bluebell Shop, daughter Sophie is hearing from another volunteer how her partner needs to rehome his hen. At this point, her partner arrives with hen in box and presents hen to bemused daughter. Much confusion and merriment then ensues.  Little hen spends the afternoon making her presence heard from the stockroom until Sue arrives to claim both of them and take them home to Upperhurst Farm, where Bluebell the no longer homeless hen, is introduced to her new flock friends.

Sophie’s reaction is not recorded . . .